Liverpool Fans Take Action by Local Firm Against UEFA, French Police and Authorities. Join us now to take action. No Win, No Fee.

R JAMES HUTCHEON SOLICITORS ARE A LOCAL LIVERPOOL LAW FIRM, ACTING FOR LIVERPOOL FANS, WHO ATTENDED THE UEFA CHAMPIONS LEAGUE FINAL IN PARIS. WE ARE TAKING ACTION OUT OF THE EVENTS THAT TOOK PLACE ON 28/5/22 INVOLVING LIVERPOOL SUPPORTERS, FRENCH POLICE AND OTHER FRENCH AUTHORITIES WHILST ATTEMPTING TO ENTER THE STADIUM AT THE CHAMPIONS LEGAL FOOTBALL FINAL, OUTSIDE THE STADE DE FRANCE.

A local Liverpool firm with extensive experience with group litigation, psychological trauma, injury and Human Rights are acting for a number of Liverpool fans who have been caught up in the mele and trauma they experience and witnessed outside the Stade De France on Saturday 28th May 2022 when attempting to enter the French Stadium in Paris to watch the UEFA Champions League final between Liverpool v Real Madrid.

Our experienced solicitor and owner of the practice Mr Ronnie Hutcheon also attended the Stade De France that evening with his two children and three friends.  Ronnie has been a season ticket holder at Liverpool Football Club for over 25 years.  Thankfully for him and his two children and friends they were not hurt but it was quite frightening when leaving the stadium after the final whistle: he explains:

‘We got into the ground over an hour before kick off.  It was relatively straight forward for us as we entered the Stade De France with a digital ticket rather than a paper ticket at Gate G.  Whilst in the stadium I queried with my children where are the Liverpool supporters at our end as it was half empty whilst the Real Madrid end was almost full.  There was then the Stadium notices that the kick off was delayed.  After the match I decided to leave the stadium with my two children and friends immediately.  As we got to the gate it was closed and manned by the police.  We were just standing there and things began to escalate as to why we were made to wait, we were then being squeezed and shoved about.  I began to fear for our own safety and my mind momentarily thought of Hillsborough.  I did not go to that ground but I know friends who did. The Gates where eventually opened and we were allowed out of the stadium but there was nobody to show us out or where to go to the Metro.  Police had vans blocking some roads, no help or direction at all.  We got lost, having to negotiate side streets, some dimly lit and we became a bit anxious.  We did manage to find the Metro about 35 minutes later (it only took us 10 minutes or so reach the ground earlier) but even here there were locals shouting support for 'Real Madrid' and one person in particular was looking for a fight.  He did, eventually, when he tried to board a train! The trains were delayed for some reason and we had to stand at the station getting loads of abuse from locals.  Nobody intervened, there were no police about, no stewards.  We then received loads of messages to ask us if we were OK as they were concerned we were caught up in the horrible scenes.’

My ticket below is digitally activated at 6.47 pm. 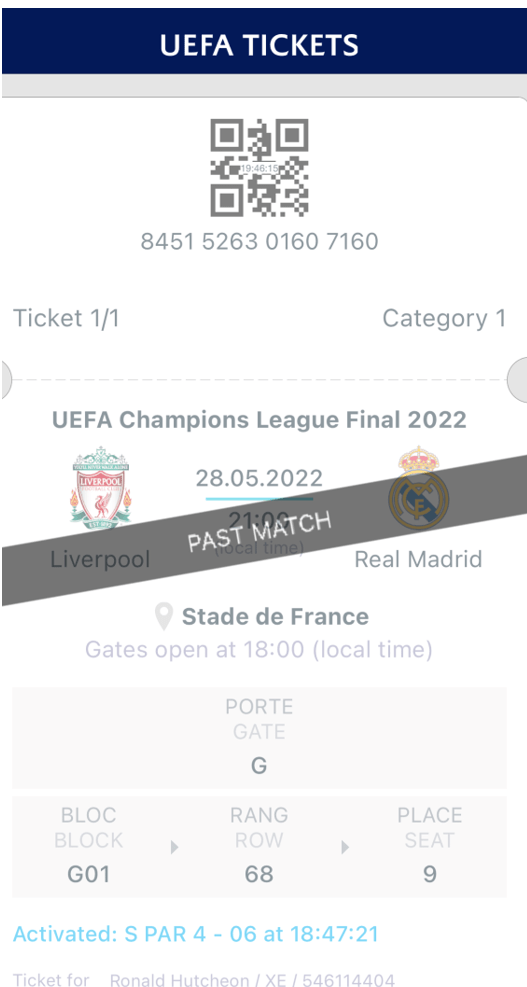 My firm has a wealth of experience in bringing cases under the Human Rights Act and basic freedoms to include Group Litigation.   We are acting for many Liverpool fans to claim compensation below are three eyewitness accouWhnts:

‘We walked to the ramp leading to the concourse.  Because 2 police vans were funnelling us we were all split up at is was chaotic and dangerous…[as we got to the turnstiles] a group of locals stormed the gates…They [stewards] put the ultraviolet pen on my ticket.  The guy in the suit looked me up and down, ripped up the stub on my ticket, handed it back and said no ticket go away…then the pepper spray started…I was worried I would have to run the gauntlet of the locals on my own.

‘A group of us travelled to Paris….We arrived at the stadium two and a half hours to go until kick-off.  Despite arriving early we ended up in large queues with thousands of others and had to constantly hold our belongings close as groups of local pickpockets weaved in and out of the crowds.  We were forced towards bottlenecks situated under a bridge outside the stadium.  The small passage wasn't big enough to smoothly allow 20,000 Liverpool supporters to reach the stadium…it was a scary experience…We managed to move through packed crowds towards Gate Z.  We found that this gate, along with Gate Y was closed. Queues began to build up quickly and went out of control, and there was a real fear that crushes were beginning to form…We were tear gassed and crushed…’

In addition to the said actionable Common Law Torts, all involved in the events were, on the face of it, “victims” as defined within Section 7 HRA 1998, who were subjected to violation of at the very least, the following Convention rights:

Who are the possible Defendants Liverpool Fans can take action against?

The obvious Defendant is UEFA who was, at all times, responsible for the planning and implementation of the arrangements for the final. UEFA at all times owed a duty of care to all attendees at the final to keep them safe and secure. UEFA will, no doubt, have delegated quite a lot of its responsibilities to other entities and organisations within the French jurisdiction.   Certainly, from the perspective of English law, however, on the face of it UEFA cannot and indeed could not really be able to “delegate away”, so to speak, its primary responsibility for any actionable torts that caused damage to the attendees of the Stadium on the night of the Final, by trying to “palm off” responsibility to another individual/s and/or organisation/s. UEFA is not a Public Authority as defined within Section 6 HRA 1998.  Obviously the French Police are.   Also, within the Senat Report, there is reference to potentially other Public Authorities, all of whom were involved in and as such, potentially liable and responsible for the events that took place that evening, involving a particular cohort of fans outside of the Stadium.  Precisely which Public Authorities are involved will of course depend on what is contained within the disclosure and what is said by UEFA in its final report .  At this stage, however, on any analysis the French Police at the very least, are potentially liable for violations of the fans’ Human Rights.

Can Liverpool Fans Bring Claims in the UK?

All of the fans purchased their tickets to attend the Final in the jurisdiction of England and Wales subject to the terms and conditions of the ticket sales which my firm are investigating.

Gerald Darmanin, Minister of the Interior, and Amelie Oudea-Castera, Sports Minister blamed Liverpool fans for turning up with fake tickets or without tickets at all. Gerald Darmanin commented that “Manifestly, this kind of incident only seems to happen with certain English clubs,”. Darmanin defended the Police’s use of teargas as this “allowed people to be saved from being crushed” but conceded that it “caused damage, particularly to children.”

The Senat then produced a report The report is in French, so this would be useful to have translated. The report found:

“The report made clear it had been unacceptable for the state to initially suggest the chaos was the fault of Liverpool supporters. The senate said Liverpool fans had initially been “unfairly” blamed by the French interior minister, Gérald Darmanin, in order to “divert attention from the inability of the state to adequately manage the crowds present” as well as the state’s “failure to curb” the actions of “several hundred violent and coordinated” delinquents who mugged and pickpocketed supporters outside the stadium.

Crucially, the report highlighted intelligence failings which showed how French police had misjudged Liverpool fans and had a totally outdated view of them. The report found that the organisation of security for the match was “founded on a dated vision of British supporters, harking back to the hooligans of the 1980s”. It added that public authorities therefore almost exclusively approached the match in terms of the “crowd control” of English supporters.”

The senate report found: “The political will to make the presence of British supporters appear as the only cause of the chaos at the Stade de France – which was perhaps intended to mask the poor organisational choices – is in no way acceptable.”

The Chief of Paris Police, Didier Lallement, said the use of teargas was “regrettably necessary” at some points to “maintain the stadium’s impermeability”, although he apologised “wholeheartedly” for “the discomfort many spectators may have experienced”.

Two of the French officers in attendance at the match are being investigated for disproportionate use of tear gas as there had been “a certain number of inappropriate and disproportionate gestures” and that these officers had used the teargas in a way that “was against the rules of its use”.

On 3rd June, UEFA issued an apology to fans and outlined their terms of Reference for their Independent Review into the events on 28th May.  This promises that the Review: