We are often asked ‘How do I claim compensation for a late diagnosis for stomach cancer?‘ Please see further below but to understand about making a claim for clinical negligence we have provided some information statistics and prevalence of the cancer.  Stomach Cancer is not one of the more common types of cancer, only accounting for 2% of annual cancer cases in 2017 according to Cancer Research UK on stomach cancer, being the 19th most common cancer in women and the 13th most common cancer found in men.

However, despite the lower amount of people being diagnosed with Stomach Cancer in the UK, there is a compensation claim for misdiagnosis of stomach cancer. This is apparent when looking at statistics provided by Cancer Research, stating that over 70% of Stomach Cancers are diagnosed at a late stage in the UK

In terms of mortality, there are currently around 4,300 Stomach Cancer deaths in the UK every year, and is currently the 14th most common cause of cancer death in the UK; accounting for 3% of all cancer deaths.

Being most prevalent in people ages over 75 (57% of all cancer deaths) especially in deprived areas. It suggests the socioeconomic tendencies and lack of availability to diagnosis is severely impacting the mortality rates of the disease.

Due to Stomach Cancer being rare in the UK, the symptoms can be easily ignored. This can allow the cancer to spread to grow and progress to a later stage, potentially metastasizing.

The typical symptoms include:

If you are currently experiencing any of the above symptoms, get in touch with a medical professional immediately. To read further symptoms, follow the link below.

Stomach Cancer is usually developed in the Cardia, the part of the stomach that is closest to the oesophagus. The cancer is formed when cells in the stomach become abnormal and start to multiply. More than 90% of Stomach Cancers arise from the mucosal tissue lining the inside of the stomach.

If left untreated, the abnormal cells will multiply around the stomach, progressively getting worse and metastasizing around the body until the patient has died; this is why it is so vitally important to get diagnosed quickly.  Medical professionals should be able to diagnose quickly if the patients has been properly screened, preventing a late diagnosis of Stomach Cancer. If not, the patient is entitled to make a claim for compensation due to medical negligence. If you feel you have suffered due to clinical/ medical negligence, please contact us immediately and speak to our specialists. 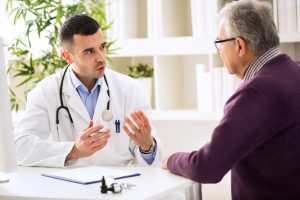 There are four main stages to Stomach Cancer, each progressively worse. Learning these will show the importance of getting an early diagnosis. The four stages are:

Stage 1: The cancer has not spread beyond the stomach wall.

Stage 2: The cancer may have spread into or through the inner, supportive layer of the stomach/ or to nearby lymph nodes.

Stage 3: The cancer may have grown into the inner, supportive muscle or outer layer of the stomach as well as nearly lymph nodes.

Stage 4: The cancer has metastasized into nearby organs or boy structures/ or distant body parts.

Due to over 70% of Stomach Cancer cases being diagnosed late in the UK, it is of paramount importance to get a diagnosis as quickly as possible; in order to avoid the cancer progressing to a later stage. Regular check-ups with medical professionals are advised, especially if you are at greater risk of developing Stomach Cancer.

Lifestyle choices are important in preventing Stomach Cancer, 54% of cases are preventable in the UK (via Cancer Research).

Various lifestyle factors contributing to Stomach Cancer is a bad diet, containing large quantities of foods such a red/ processed meat, foods high in salt and a diet containing too little fruits/ vegetables.  Smoking and drinking too much alcohol are also great contributors, smoking account for 20% of Stomach Cancer cases.

How Can I Make A Claim?

If you received a misdiagnosis of stomach cancer or delayed stomach cancer diagnosis, you should be able to claim for compensation due to medical negligence or mistake.

When a loved one has died due to misdiagnosis of cancer, it’s possible to recover compensation on their behalf. You may be able to claim if you are the spouse or child of the deceased, or if you’re the parent of a child. Often there is a three-year time limit after the date of the death to make a claim so you must provide your solicitor with instructions quickly.  The three year period may be extended. However, the sooner a claim is made the better. For more information on who can claim see our specialist website: dependency claims, who can claim?