We are often asked ‘How can I claim compensation for late diagnosis of Bowel Cancer?’ If you feel you have been misdiagnosed you should instruct us as specialist compensation solicitors to obtain expert medical and legal help for you and your family. It is important to note that Compared to other cancers’, the symptoms of Bowel Cancer (also known as colon cancer or rectal cancer) are not initially concerning and would not usually provoke a reaction to get tested, which is why if you have experienced or are experiencing any of the below symptoms to get tested immediately.

These symptoms can also be easily missed and waved off by medical professionals, which could lead to delayed screenings for Bowel Cancer and late diagnosis.  If that is the case contact the expert solicitors who can help you claim for the unnecessary pain and suffering if the bowel cancer has not been detected in time and or your quality of life has been affected by the delays. If you have experienced a late Bowel Cancer diagnosis by a medical professional, you may be entitled to compensation; talk to us following the link below. 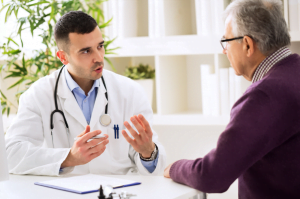 Bowel Cancer is different due to being harder to spot the initial symptoms of the cancer, these symptoms include:

Using statistics gathered by Cancer Research UK, there are a staggering 43,300 new Bowel Cancer cases in the UK every year, that’s 110 new reported cases every day, meaning every 1 in 20 people will develop Bowel Cancer in their lifetime. The survival rate of Bowel Cancer is hugely dependent on what stage the cancer is diagnosed in; this is why medical professionals cannot allow late diagnosis’ to occur.

In addition to this, alcohol abuse is a contributor to Bowel Cancer; increasing chances by 8% according to Cancer Research UK, lifestyle choices make a huge difference in terms of prevention of Bowel Cancer. However, medical professionals must diagnose before the cancer has time to grow and progress into a higher stage. If not, and the patients has suffered due to this negligence. The patient is entitled to make a claim, follow the link below to find out how you can make a claim.

Regarding the mortality rates of Bowel Cancer, there are approximately 16,600 deaths per annum on average, that’s 45 every day, which is why it is the second most common cause of Cancer death in the UK; accounting for 10% of all cancer deaths in the UK.

Bowel Cancer deaths are most prevalent in deprived areas, which could lead to a comparison to socioeconomic depravation in relation to Bowel Cancer. Furthermore, this type of cancer is most common in in people aged over 75 (58%) according to Cancer Research UK.

With Bowel Cancer being the third most common cause of cancer death in both men and women, it is a shock to learn that according to Cancer Research UK statistics, incidence rates have only fallen by 2% in females and 9% in males. This suggests that there is mass medical negligence still in the diagnosis of Bowel Cancer which is leading to suffering. Follow the link below to learn about whether you have suffered medical negligence and whether you are eligible to make a claim.

There are four main stages to Bowel Cancer, each getting increasingly worse; hence the importance of being diagnosed as early as possible. The four stages are:

Stage 1- The cancer has not spread outside the bowel wall

Stage 3- The cancer has spread to nearby lymph nodes

Stage 4- The cancer has metastasized/ spread to other parts of the body.

According to the NHS website the exact cause of bowel cancer is not known, but the following seem to be high risk factors in developing bowl cancer. These matters amongst others will be considered by your General Practitioner and treating Hospital Consultant:

There are other risk factors but if any one or more of the above apply to you and there has been a delay in diagnosing bowl cancer, you may be able to claim compensation.

How Can I Make a Claim for bowl cancer?

If you received a misdiagnosis or delayed cancer diagnosis, you should be able to claim for medical negligence.  For more information on who can claim see our specialist website: dependency claims, who can claim.

When a loved one has died due to misdiagnosis of cancer, it’s possible to recover compensation on their behalf. You may be able to claim if you are the spouse or child of the deceased, or if you’re the parent of a child. Often there is a three-year time limit after the date of the death to make a claim so you must provide your solicitor with instructions quickly.  The three year period may be extended. However, the sooner a claim is made the better.