The Claimant’s case is that he was driving his BMW K200 motorcycle at approximately 40mph approaching a fairly sharp bend to his left. He stated that he took up a position slightly to the right of the centre of his lane to enable him to have the best view possible of the bend.  The Claimant stated that as he was going around the bend, the Defendant, who was travelling in the opposite direction, came across the continuous white line in the centre of the road and her wing mirror clipped the Claimant’s right shoulder, the Claimant also struck the car on the rear wheel area causing the Claimant to go into a speed wobble and head into the path of a van which was travelling behind the Defendant. The Claimant lost control of the motorcycle and fell to the ground. The van had taken evasive action by turning to its left and it ended up in a ditch at the side of the road. 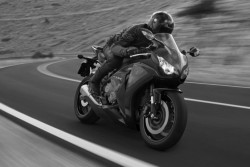 The Claimant suffered severe injuries including a fracture to his right scapula and clavicle, bilateral lung contusions, bilateral pneumothorax, spinal fractures and multiple rib fractures which required surgical intervention, for which he had to take up to 40 painkillers each day.  To see how much you are entitled to visit our page HERE.

In this case there is was a stark conflict between the parties as to the side of the road on which the accident occurred. The Claimant and the Defendant were both adamant that the accident occurred on their side of the road.
There were no skid marks left by either of the vehicles, so the point of impact could not be determined from an examination of the roadway. Independent evidence was obtained from a witness as to the effect that prior to the impact, the Claimant had been travelling slowly in the centre of his carriageway.
The Judge found that the Defendant’s car was on its correct side of the road. It was travelling within the speed limit for the area. It was travelling close to the white line in the centre of the road, but did not cross over it. In the circumstances, liability for causation of the accident must rest with the Claimant.

We can assist if you are involved in an accident, please contact us.