In this case an employee sustained noise induced hearing loss and thus claimed compensation against his employers. In a case called X v Rover Group decided in 2012, he worked for The Rover Group formerly British Leyland, Land Rover Limited and MG Rover Group Limited between the years 1970 to 1997..

He used to be in inspector of various machines such as; 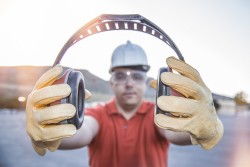 He was exposed to noise between 1970 to 1980 and thereafter for the rest of his time he was employed by the company in various forms, he was promoted to quality control where the exposure to noise was considerably reduced.

During the time he was exposed to potential damaging levels of noise at work, he was not provided with any hearing protection.

Later, after he left his employment he became aware of a gradual decline in his hearing.  He sought advice from his deafness claim solicitors for claim for hearing loss compensation.  His deafness solicitors instructed an Ear, Nose & Throat specialist to examine him and provide a medical report on his hearing damage.

The ENT expert advised that the sustained a 12.66 db loss attributable to noise loss at work and also slight tinnitus.*  The court found following the advice from the medical ENT experts that there was an acceleration by 4 years for the need of hearing aids.

The global award for hearing loss compensation was as follows:

£1250 for the provision of hearing aids

*Compensation for noise induced tinnitus:  Tinnitus (‘buzzing,’ ‘ringing,’ ‘whistling” noises in your ears) which is often further injury to the worker can be associated to noise damage by excessive levels of noise.  There is often damage to hearing by noise that  also caused tinnitus.  Like deafness, there is no cure for tinnitus. The injury is permenant.

For advice on making a hearing loss claim for compensation please contact us now.  There is a limited time to claim, generally within 3 years from when you knew or had reason to believe that your hearing loss was caused by work.  Your employer’s insurance company will always raise this a defence as a matter of routine so you cannot delay.  If your employer’s insurers are successful in their limitation defence, your hearing loss claim for compensation will be lost.