In this case the Claimant made a claim back in 1989 for deafness compensation against his former employers British Gas.  During the course of his employment with this company he had extensive use of pneumatic hammers and drills.

His job title was a gas board labourer. 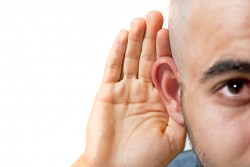 He instructed specialist hearing loss claim solicitors who took on his case against his employers.  His solicitors obtained an independent medical report from an Ear Nose and Throat Surgeon who advised, following a hearing text and examination confirmed a diagnosis of work related noise induced hearing  loss or deafness due to work.

The expert described the damage to his hearing as moderatley severe high-tone loss which required the use of a hearing aid.

In addition to hearing loss he also suffered from tinnitus or ringing, buzzing and hissing noises in his ears.   The tinnitus occurred daily and both conditions would worsen with age.

His tinnitus was classes as ‘very severe’ whilst he has a masker (that is a device that creates a ‘white noise’ to mask the noise of the tinnitus) it did not help much.  The tinnitus appeared worse at night when it was quite and he tried to get some sleep.

As a result his sleep was disturbed.  He became irritable and took out his frustrations on his family.

At the time of settlement he was only 42 years of age.

If you wish to obtain advice and assistance in making a deafness compensation claim why not instruct the hearing loss at work solicitors to see if you can also make a claim.

Contact us now for advice on a no win no worry basis.