In this work related deafness claim that was decided in 1999, the Claimant worked in a noisy environment both working with tools and equipment which emitted noise and also along side others.

The combined effects was an excessive din that made it difficult simply to communicate to his fellow work mates without having to raise his voice or to should to be heard.

The hearing loss claim solicitors that the Claimant instructed took a detailed account of his working background knowing that any noise exposure prior to 1963 could not be claimed.

In addition the Claimant was examined by an independent doctor who assessed his hearing.  An audiologist was also appointed by the doctor to undergo pure tone hearing test in order to indicate his response to pure tone noises and plot the results in a graph (see illustration below). 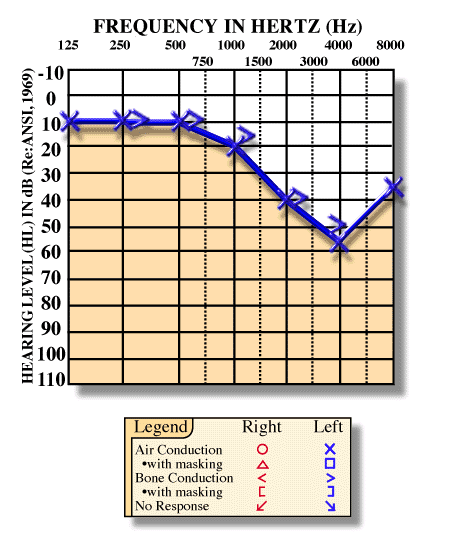 The above audiogram is not the one taken from the case refereed to in this article but simply used for illustration purposes.  The audiologist will put headphones on the claimant and transmit pure tones and he would be asked to press a button when he can hear the tones at different frequencies. The results are then plotted on a graph (audiogram).  A typical notch at 4 kHz as above but it can appear at other frequencies, is suggestive of noise damage to hearing.

In this case it was decided that his overall hearing loss was 13.33 due to noise. The assessment was characteristic of noise induced deafness at work. He showed typical symptoms of noise damage, not being able to hear the spoken word where there is background noise like being in a restaurant or social gathering.

The Claimant was only 42 years old at the time of the deafness compensation claim and his hearing would only get worse overtime due to the affects of ageing.  He did not complain of tinnitus.

Contact us to make a claim for work related deafness.  There are time limits to make a claim so it is important to claim immediately if you think your hearing problems can be due to your work.